A 1940 Rolex Oyster wristwatch belonging to a Stalag Luft III POW has sold for $246,194 (£165,000) at a UK auction house. Hans Wilsdorf, founder of the Rolex watch company, came up with a novel sales tactic during World War II. He allowed British POWs to purchase his renowned timepieces on credit. The were supplied through the auspices of the Red Cross, with payment due once the war was over.

The original owner of the watch in question was RAF airman F/Lt Jack Williams. On 7 April 1942, his aircraft, a Boston III (Z2194), was shot down near Dunkirk following a bombing raid on a power plant in northern France. From there he found his way to Stalag Luft III and became involved in the scheme that would come to be known as The Great Escape.

Williams was among the 220 men chosen to take part in the actual escape on the night of 24 March, 1944. Having drawn an early position, he did indeed get free before the attempt was discovered. Prior to making his way out down tunnel Harry, Williams entrusted his prized watch to fellow crewman and POW in Stalag Luft III W/O Don Wilson for safekeeping.

In an interview with the Yorkshire Post in April 2008, W/O Wilson recalls the words of his friend that night. “I know I’ll not get away, I couldn’t possibly get away so I’ll probably see you in the next fortnight” …. “But if by any chance I do, would you kindly take my two wrist watches home.”

Alas, true to his original instincts, the RAF flyer was recaptured and became one of the 50 escapees who found their way into the infamous pile of red X files compiled by SS-Gruppenführer Arthur Nebe. He was subsequently shot by the Gestapo, along with the other forty-nine unfortunate men.

Only around 200 of the distinctive black faced Chronograph model were made in the early 1940s. Rolex also provided a more modestly priced model, the ‘Speed King’, which was more popular among the POWs. Due to its significant connection with Stalag Luft III, the model has come to be known as The Escaper model.

As for the auction itself, bids flooded in from all corners of the world, the USA, Switzerland, and South Africa to name just a few. Staff at the auction house in Buckinghamshire were forced to man two phones at a time just to keep apace with the bidding. When the hammer finally fell at $246,194, the excitement in the room left no-one in any doubt that a little piece of militaria, not to mention horological history, had been made.

In New York, an escape map with a connection to Stalag Luft III sold for $3,125 (£2,354) at auction. While the map was listed as circa March 1945, after The Great Escape, the cache of the connection was sufficient to coimmand such a respectable figure. The origin of the item, which measured 12″ x 19″. (30.5cm x 48.5 cm), was quoted as “possibly Stalag Luft III/Stalag XIII-D,” with the artist believed to Bob Neary. 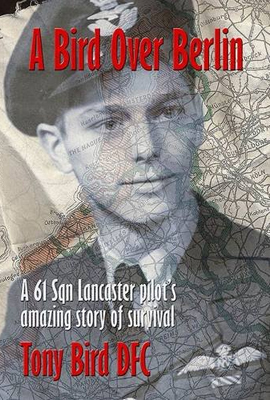 Tony Bird DFC – Author of A Bird Over Berlin

The map belonged to RAF Pilot Tom Bird DFC, whose Lancaster II (LM476) was shot down by Schräge Musik, the term used for upward cannon fire from German fighters, during a bombing mission over Berlin in April 1944. He eventually found his way through the gates of Stalag Luft III.

In later life, he went on to chronicle his WWII exploits, including his time spent in Stalag Luft III, in an excellent book, aptly titled A Bird Over Berlin.