One of the most poignant exchanges in the movie account of The Great Escape (1963) is that between The Scrounger Hendley (James Garner) and The Forger Blythe (Donald Pleasence).

Blythe: Roger’s idea was to get back at the enemy the hardest way he could, mess up the works. From what we’ve heard here, I think he did exactly that.

Hendley: Do you think it was worth the price?

Blythe: Depends on your point of view, Hendley.

Garner’s memorable portrayal as The Scrounger Hendley was based on a real-life character, Stalag Luft III veteran Marcel Zillessen.

Marcel Eric Zillessen was born in Northampton in 1917 to a German father and Irish mother. His parents soon moved north to Bradford to take over management of the family textile business.

After school, Zillessen’s first job was that of sales director in the family business. Encouraged by his Father, Erich Max Theodore Zillessen, the young man eventually went to Berlin and enrolled at the city’s university, hoping to broaden his education. This was the golden age of the Weimar Republic, and Zillessen soon became familiar with the language and customs of that society, as well as gaining along the way firsthand experience of the growing Nazi threat.

With the onset of World War II, Zillessen was contacted by British Intelligence who wanted to recruit him into their services as a spy. Uncomfortable with such line of work, he passed on the offer, stating instead that he would prefer to fight the enemy ‘face-to-face’.

And true to his word, Zillessen did just that, joining the RAF’s No. 6 Squadron and becoming a Hurricane pilot. After flying a string of raids against Rommel’s Afrika Korps, Zillessen’s aircraft was shot down on 6th April 1943 during the Battle of Wadi Akarit in Tunisia. He was captured by the Germans and subsequently moved to Italy where, after the usual bout interrogation, the airman was transported onward to Stalag Luft III. 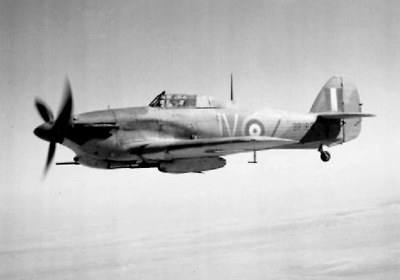 Hurricane Fighter of No. 6 Squadron over the Western Desert, 1942 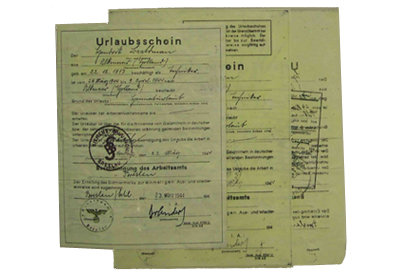 At this point, he decided to change his name to Axel Zillessen, worried that his German heritage may make him vulnerable to the authorities. Nevertheless, among the ordinary Guards, his knowledge of the German language and general education served him well, soon becoming a scribe-for-hire, penning their romantic mail. His talents didn’t go unnoticed by the escape committee either, who put him to work forging ID and travel documents for the forthcoming escape. His favor with the German guards allowed him to become a source for ink, paper, and other items useful for the escape plans. This is how he came to gain the reputation of The Scrounger.

On the night of 24 April, Zillessen was one of the last to pass through tunnel Harry and was quickly apprehended by the guards and marched back into the compound. These are Zillessen’s own words on the events as recorded later.

“Everything went wrong that night, there was an air raid and all the lights went out in the tunnel, and then a Major got stuck and it took ages to get him out.

I cannot describe what it was like when it finally broke. The Germans were absolutely livid, there were dogs rushing around the camp and guards were pouring in from all over the place.

There was still 150 PoWs left in the hut at the time we heard shots being fired. People came pouring down the tunnel telling everybody, ‘it’s all over‘.

Once I realised that the escape had broken I just leapt out of the hut. I ran as fast as I could and jumped through the window into my own room.”

Luck was on his side that night, for if he had escaped into the wider surroundings and been arrested by the local police or Gestapo, his name might well have appeared among that of The Fifty who were later executed in cold blood.

By any standards, the brutally disproportionate response to the escape from the German high command was ‘not cricket’, breaking as it did the most basic tenets of the Geneva Convention. But the headline also has another, somewhat lighter, meaning. In an entry in F/Lt Keen’s Wartime Log, Zillessen and he are playing cricket together in the North Compound. It is September 1944, 6 months after the night that would become known in history as ‘The Great Escape.’ 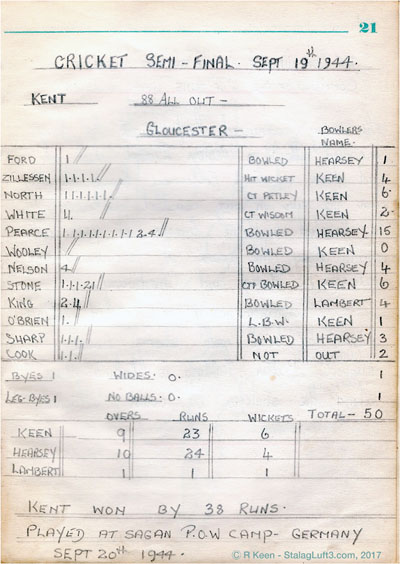 After the war, Zillessen returned home to the family business and got married, raising several children and enjoying a comfortable lifestyle. In later years, he and his family moved to the picturesque Robin Hood’s Bay on the Yorkshire coast, where they ran that most quintessential of British establishments, a seaside guest house. For those unfamiliar, they are renowned for their fry-up breakfasts, and it is always time for tea.

Returning once more to the movie, and on the eve of the escape, Hendley reassures an anxious Colin, troubled by his failing eyesight.

Hendley: Ah, Hell, we’ll make it in great shape. Colin, do you have any tea?

Hendley: Let’s have some.